Building a Bridge! MLGC and Garrett County Habitat for Humanity partnership since 2021 is a key community project, designing and planting native flower gardens at homes in the Habitat for Humanity community.
It was a great day for the parade!!! So much fun starting with a flat bed trailer & seeing the transformation to a beautiful float with a wonderful message of a partnership between Mountain Laurel Garden Club and Garrett County Habitat for Humanity.  Garden items built by volunteers from GCHFH and MLGC from recycled materials in the HFH Home Store were featured on the joint float during the 2022 Autumn Glory Parade and raffled off to three lucky winners.  Proceeds from the raffle will be used to fund MLGC-GCHFH native plants gardens. 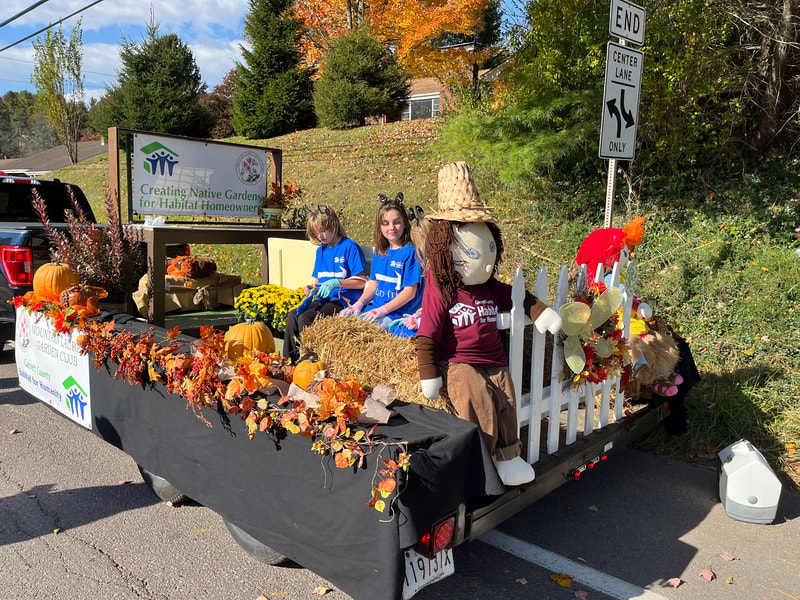 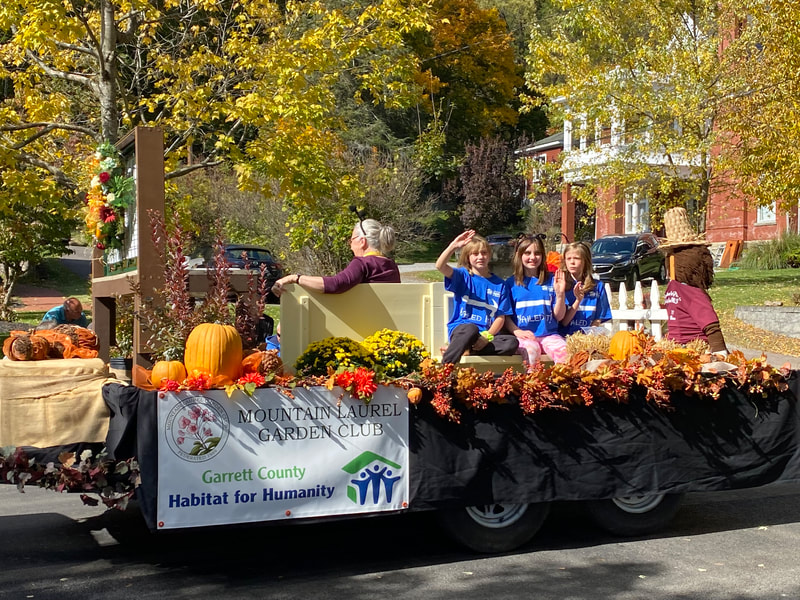 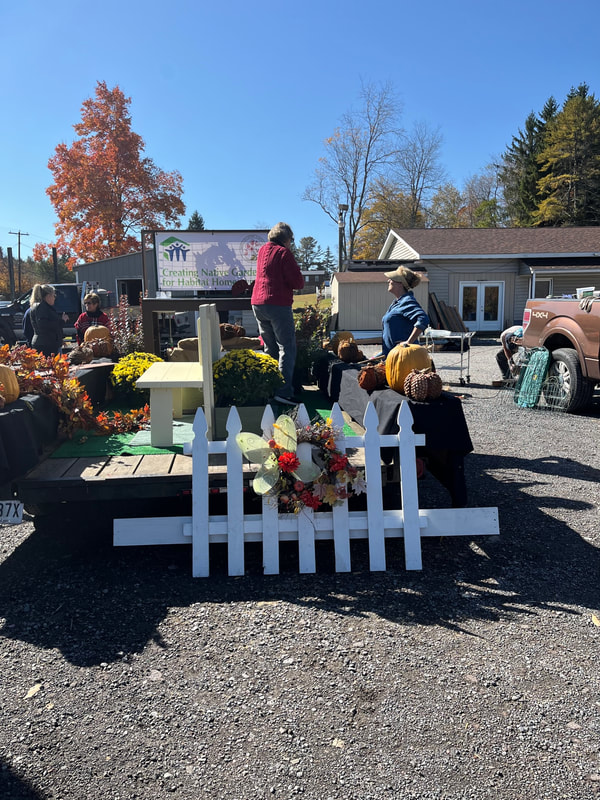 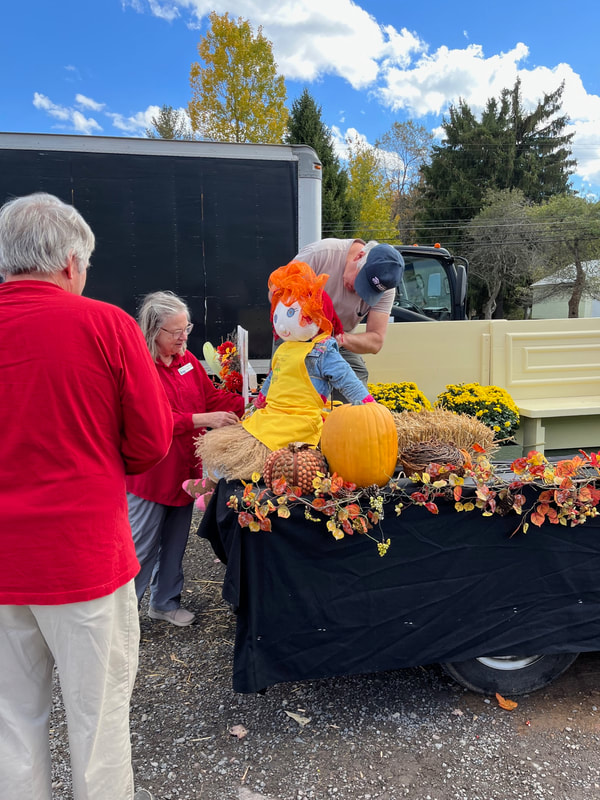 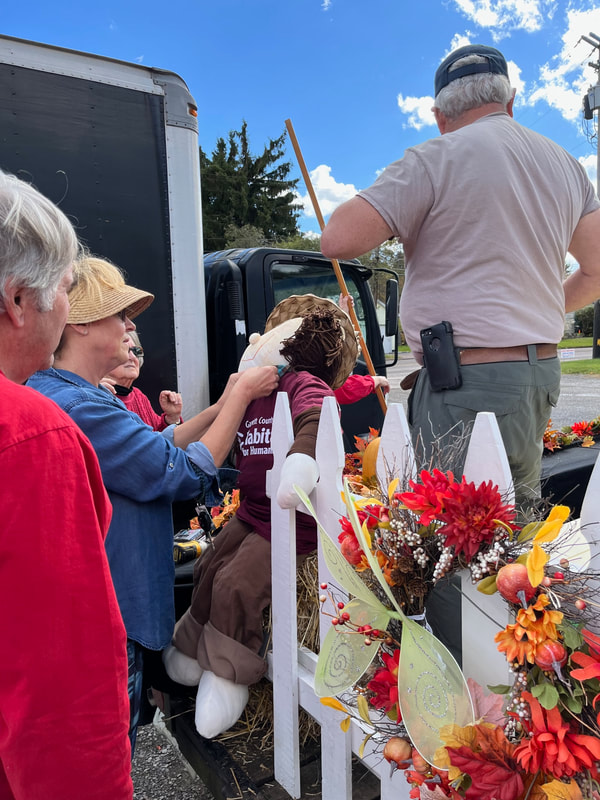 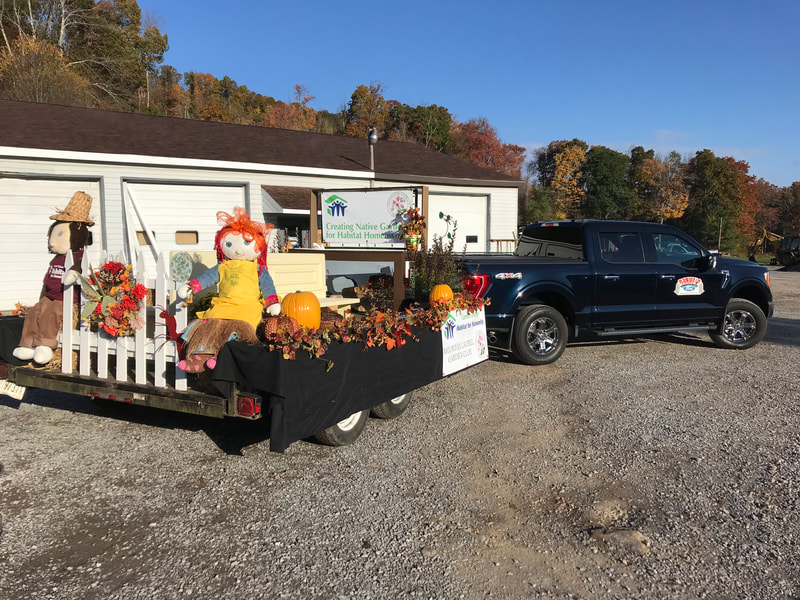 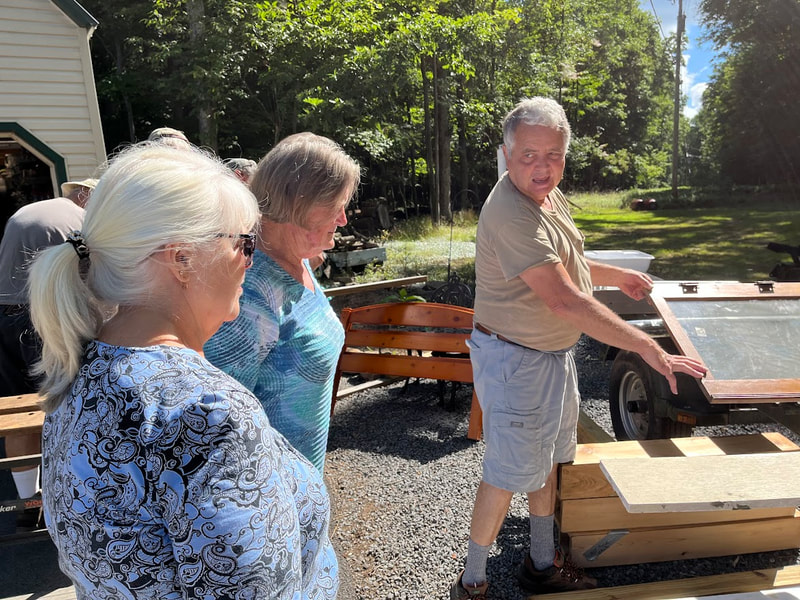 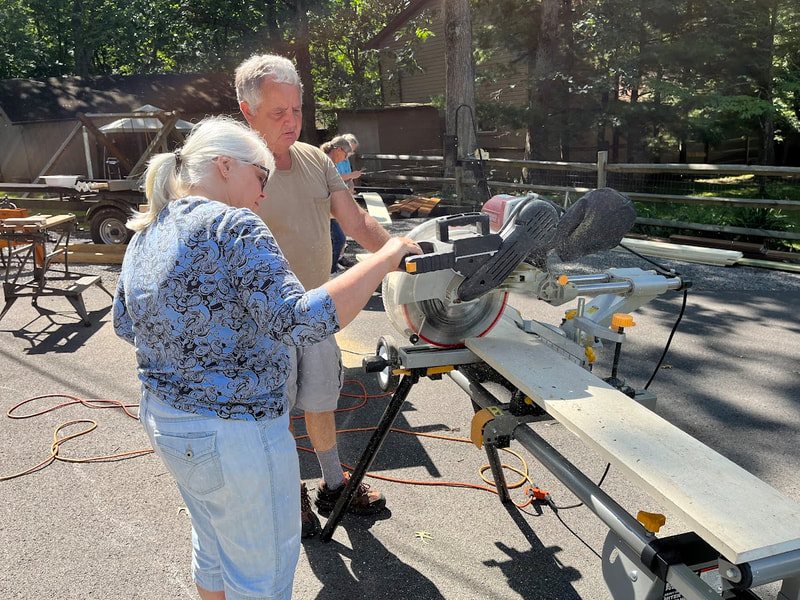 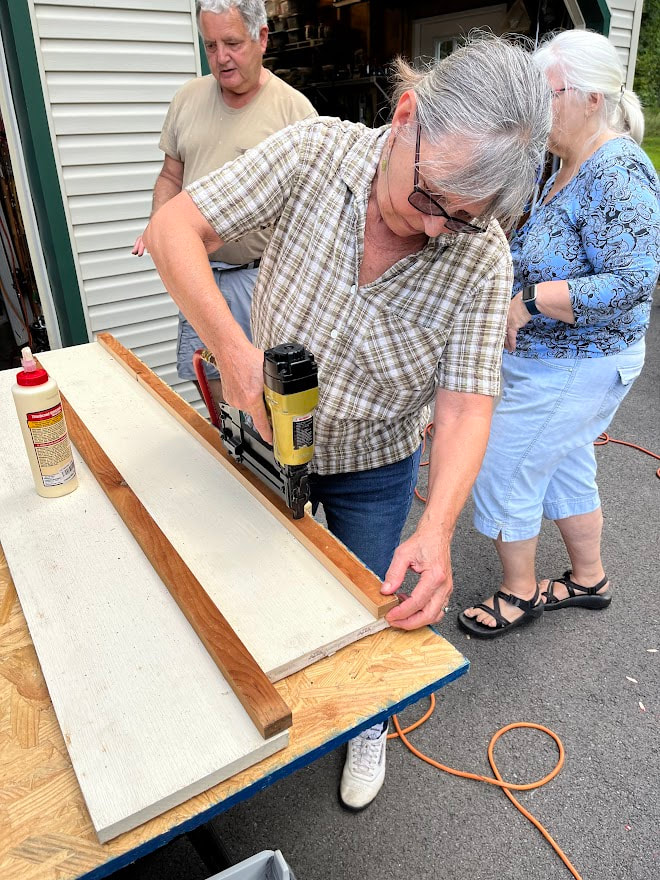 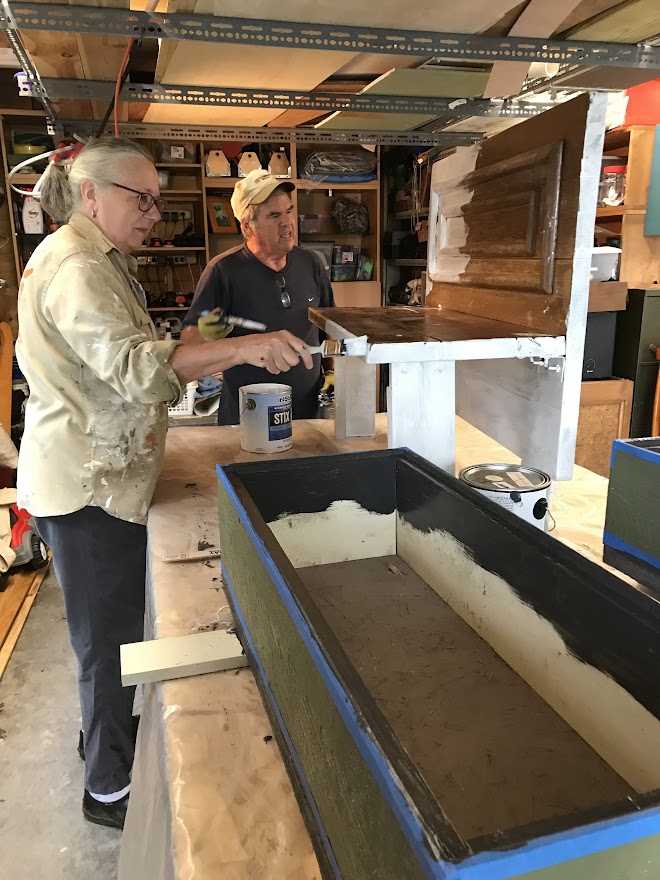 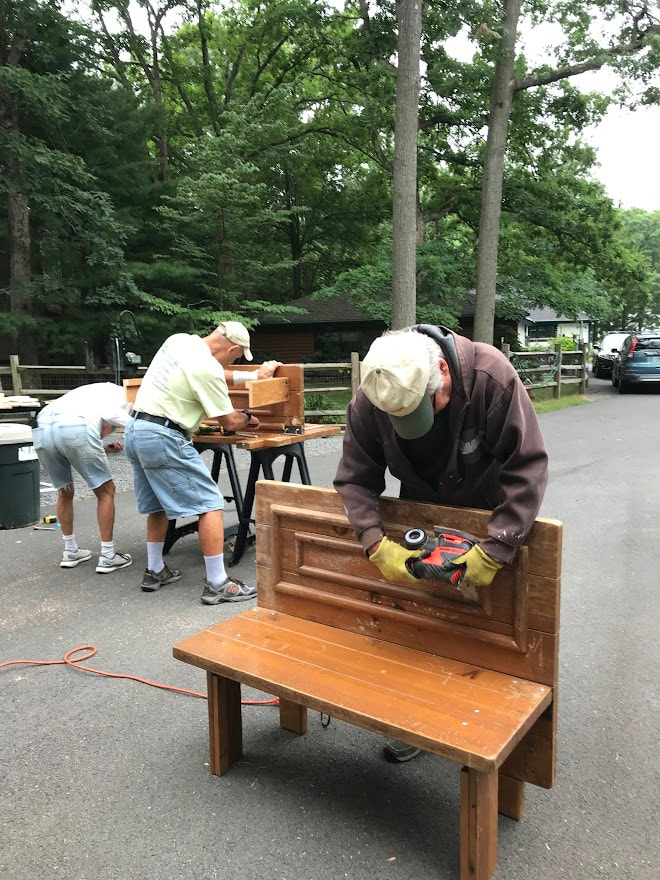 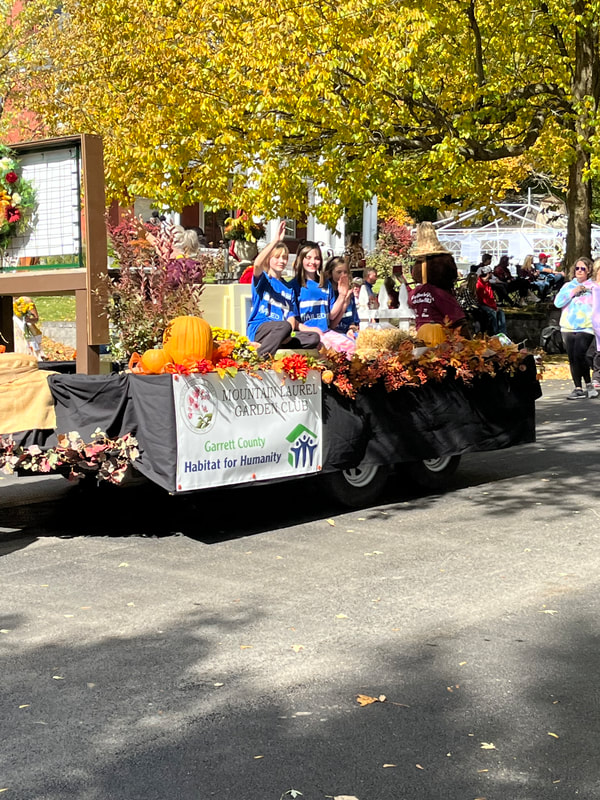 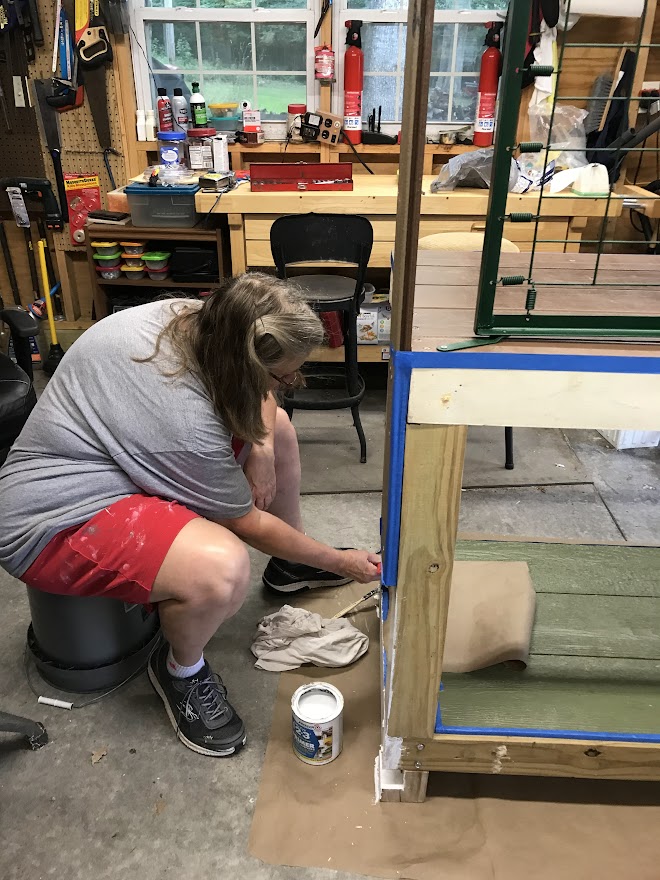 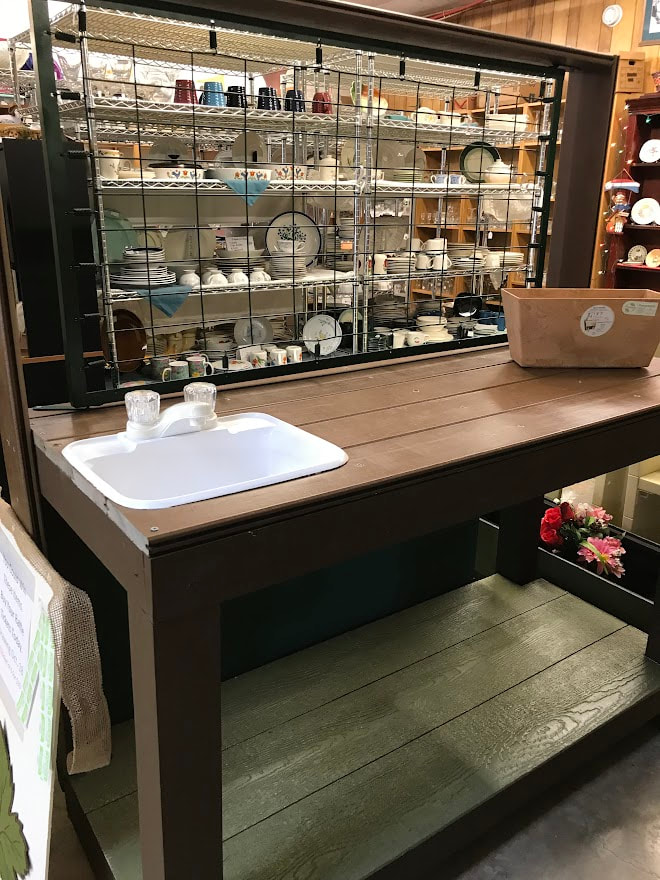 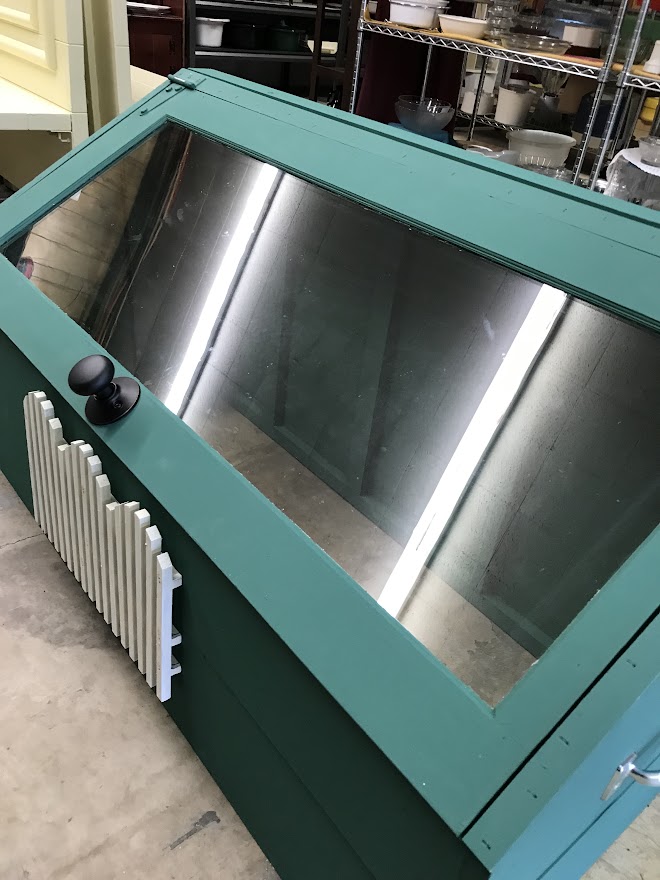 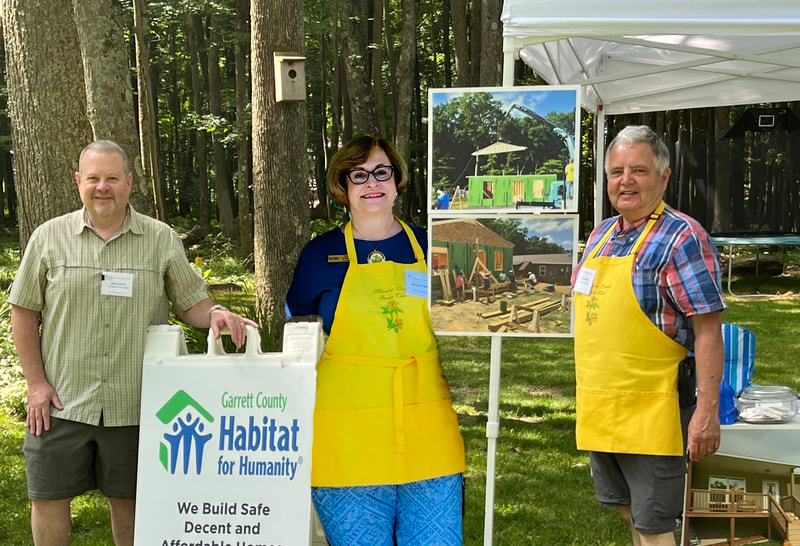 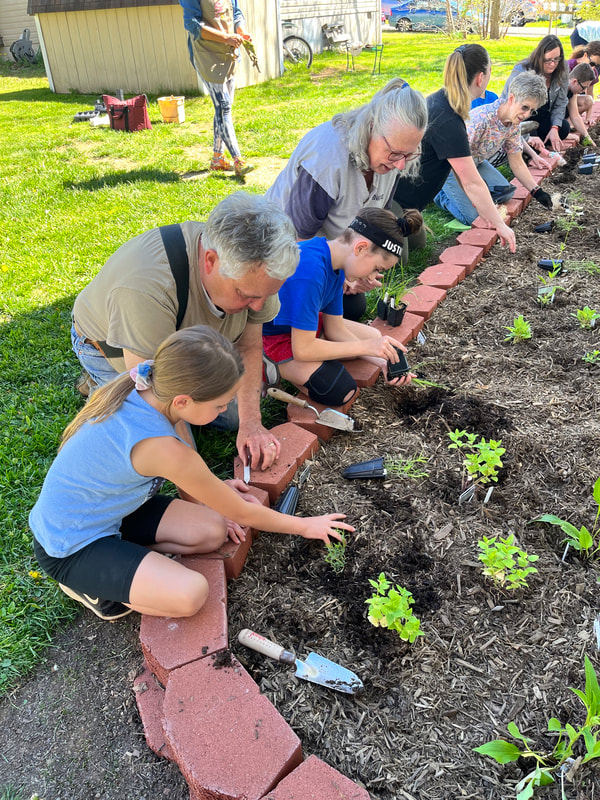 Habitat for Humanity and Mountain Laurel Garden Club Partnership Denise Kramer, president of the Mountain Laurel Garden Club (MLGC) since June 2021, announced her two-year theme as “Building a Bridge” between the club and the community. A key community project conceived of and executed during the last year under that theme has been the club’s partnership with Habitat for Humanity (HFH) in designing and planting a
demonstration native plant garden at the home of Sandy and Brittney Nice, HFH homeowners.

“A comment from club member Sherri Snyder in June 2021 that ‘we should do something with Habitat’ was the original impetus for the project,” notes Denise Kramer. The club received a National Garden Clubs Plant America Community Project Grant of $600 to kick off the project and purchase the plants. Garrett County Habitat for Humanity (GCHFH) contributed an additional $636 toward the native plant garden. Two members of the club, Linda Harris and Donna Miller, attended an NGC Landscape Design School and designed the native plant garden as their final project. In December 2021, Steve Bortz (Executive Director, GCHFH), Denise Kramer, Betsy Potts (Co-Vice President, MLGC), and Greg Koeln (Chair, MLGC HFH Project) met to discuss plans to date and created a three-party agreement among GCHFH, MLGC, and the HFH homeowners to move the project forward. Various club members, along with the assistance of the local UMD Extension Office for soil testing and the Nice family, ordered and hardened the plants, tested the soil, tilled the site, laid landscape blocks, amended the soil with topsoil and mushroom soil, and placed plant labels for the 64 plants representing 12 species of native plants.

The actual planting took place on May 11 and the garden is currently flourishing. “The GCHFH Board thought this was a wonderful win for both organizations, the homeowners, and Garrett County residents at large,” says Steve Bortz. “We are committed to providing ‘seed’ money for a new garden each year to beautify our owners’ homes and improve our environment.”

MLGC has an ongoing commitment to plant “native” in order to attract pollinators and support wildlife habitat and conservation landscaping. “I will be registering our achievement in Dr. Doug Tallamy’s Homegrown National Park initiative (https://homegrownnationalpark.org/),” notes Greg Koeln. “I believe this will be the first native plant garden on private property to be registered for Garrett County in the Homegrown National Park initiative.”

"We are so excited to be the first HFH homeowners to participate in this program, " says Brittney Nice. "Our family has learned so much about the importance of native plants for the environment."

There was an informational exhibit on the HFH Project included on MLGC’s 21st Country Gardens Tour on June 25. The club hopes to feature the Nice property on a future garden tour and use it as a model for other HFH locations. 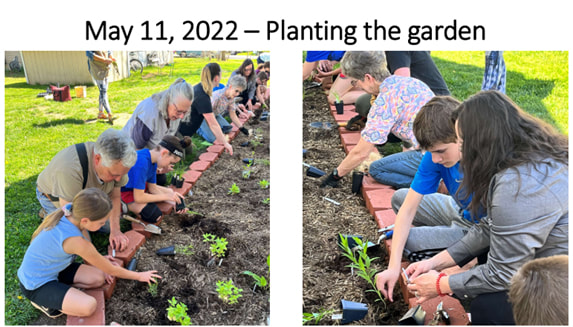 One little seed was planted ! And wow it is growing...

Sherri Snyder woke up on the morning of the garden tour thinking, “What if MLGC provided native landscaping for our local Habitat for Humanity houses? When building houses, the landscaping is the last thing done, and often there are limited funds to spend for landscaping. And wouldn't it be great if they could eventually be on our garden tour."

At the garden tour, Sherri shared her idea with Denise Kramer, Pres. of MLGC and she loved it. The next day we  became aware that one of our members, Greg Koeln volunteers for Habitat for Humanity. Our small group  met at the MLGC picnic to share our ideas.  Another light bulb moment.   Linda  and Donna Miller had enrolled in the Landscape Design school and needed to develop a plan for their class,  so their plan will be based on the habitat house.   After our meeting, Greg emailed Steve Bortz, Executive Director, Garrett County Habitat for Humanity, who contacted  the first homeowners, who are excited to work with us.  Within a month, the MLGC H4H-Habitat for Humanity committee was established.

Since this little seed of an idea was planted, the project has really grown. We have visited the homeowners who shared their vision with us. Reached out to our friend Ashley Bodkins, UMD Extension Senior Agent, who will be partnering with us. Applied for a grant and funding to help offset the cost of the project.  It’s amazing how much has been accomplished in such a short time.  All this took place before finding out Habitat for Humanity is a National Garden Club initiative.  Double win!

On Monday, October 11, 2021 we held our first  formal H4H Committee.  The landscape plans using mostly native plants was created by members Linda Harris and Donna Miller while attending the FGC Landscape design school will be used for our first H4H garden.

On October 21, Ashley Bodkins met with the committee members and the Hopeland homeowners to discuss the landscape plan in detail. Ashley worked with the homeowners children to perform a soil sample (see photo below).   The garden area will be prepared and then planted in the spring of 2022. 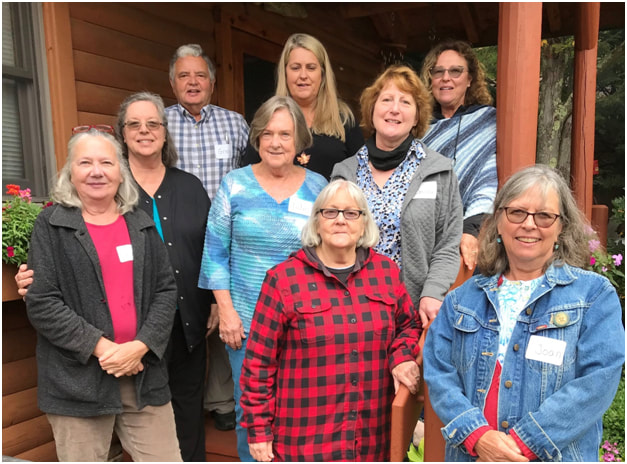 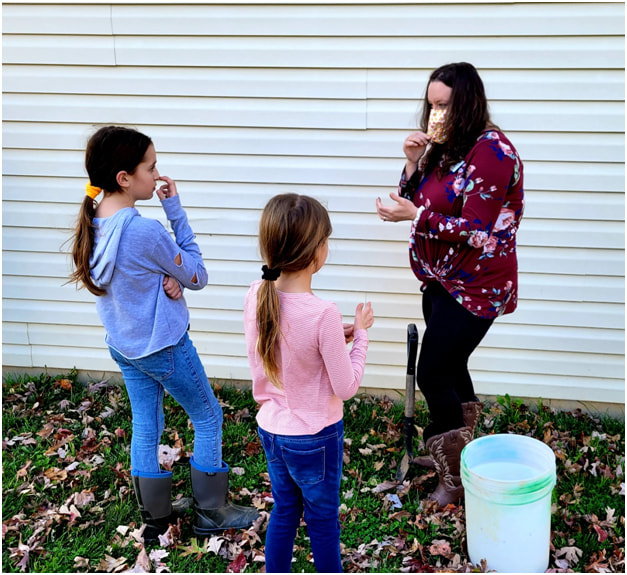 In May 1999, a partnership was formed between National Garden Clubs, Inc. and Habitat for Humanity. HFH's mission is to eliminate poverty housing from the face of the earth. NGC's goal is to encourage local garden clubs to share their expertise in gardening and landscaping with the owners of Habitat homes. In some cases, local businesses will provide materials to encourage beautification of the properties. In a recent example, the Florida Federation of Garden Club members successfully had graduates of NGC Schools teach a landscaping maintenance seminar to 18 new Habitat for Humanity homeowners. Ames tools, an NGC corporate partner, provided a hose and hose reel for each homeowner.
Habitat for Humanity Garden’s philosophy is that no commitment, physical or monetary, is too small. All endeavors and contributions will be gratefully acknowledged. State chairmen, please contact the Habitat for Humanity Chairman and share fun facts and stories. We hope to build a nationwide community through social media with this project.
A direct line of communication has been put in place for one-on-one networking between HFH Affiliates and garden club representatives. The more than 1,500 HFH Affiliates have been made aware of the NGC and HFH partnership.
The program's emphasis is on enhancing the environment by landscaping HFH homes with hearty native trees, shrubs, plants, and flowers that also attract butterflies. It is the hope of NGC to have the community, both adult and young gardeners, involved in this very worthy project. NGC's goal is 100% state participation, in some manner, across the nation.